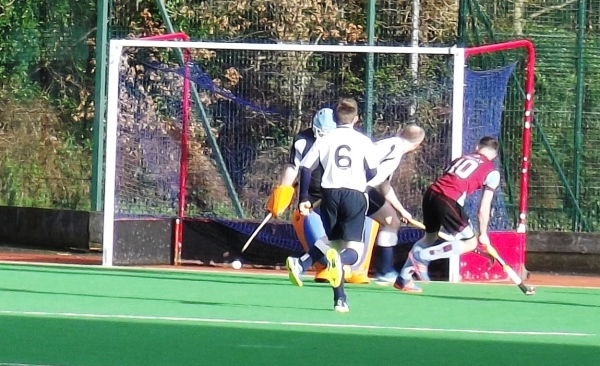 After their heroics in Limerick the previous week which saw them through to the Irish Trophy final and a run of good results to stabilise their Premier League position, North Down came back to earth with a bump last Saturday when they met joint league leaders Kilkeel.  Kilkeel have developed a strong, skilful and pacy side and they met little resistance from North Down running out comfortable 5-1 winners.

Kilkeel opened at a fast pace and their quick  inter passing proved too hot for North Down to handle.  They opened the scoring after only 4 minutes when they carved open the home defence and gave Coates no chance in goal.  North Down began to compete and from their first short corner skipper Ross Linter had a great chance to equalise but he flicked wide.  Midway through the half Kilkeel killed off the game with two goals in 2 minutes.  The first was a disputed penalty which was awarded when the ball struck a North down defender on the line but the umpire felt that the ball was entering the net and awarded a flick which was superbly dispatched into the net.  The home defenders had argued but to no avail that the ball was going wide.  Shortly after, a Kilkeel forward outpaced the home defenders and scored with a reverse shot from the top of the circle to make it 3-0 at halftime.

The second half was a more even affair but the speedy Kilkeel forwards were causing all sorts of problems however Coates made a number of fine saves to keep the score down.  North Down had two great chances to reduce the arrears.  Firstly, Jamie Orr found himself free in front of goal but was unable to get a shot away and then Phil Templeton shot wide when well placed.  Kilkeel scored their fourth from a corner and then Phil Wilson eventually reduced the arrears also from a corner.  With the final hit of the game Kilkeel got their fifth following a scramble in the home goalmouth.

This was a poor performance and a disappointing result for North Down who must now lift themselves for an away midweek fixture against Newry.