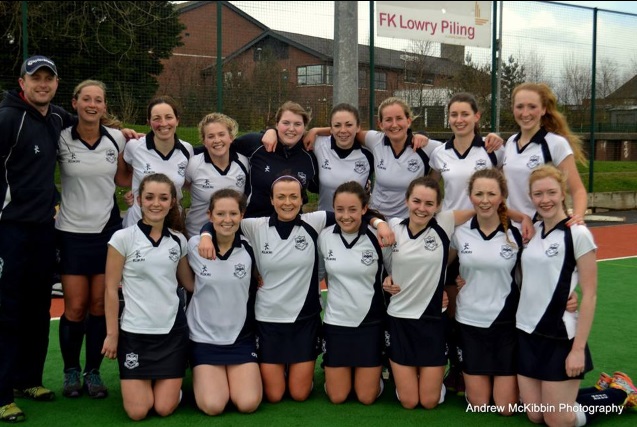 North Down Ladies 1sts made history on Saturday as they made it to the final of the Irish Hockey Trophy after defeating Cookstown 2-1 at Comber.

Honours were even going into the game as in three previous meetings this season both sides had won their home fixture and battled out a 3-3 draw back in September in the Ulster Cup. Cookstown had been tipped in some quarters as favourites to win the competition however having lost only once in their last 10 games the Comber girls fancied their chances.

The game started fairly evenly as both teams settled any early nerves. Cookstown made some early inroads and had a series of four short corners however, much like the quarter final, the North Down defensive corner team stood firm with a notably diving clearance on the right post by Bethan Brittain and Laura Clarke knocking one away on the left post. After this the home side came into the game much more and began to gain some significant territory in the Cookstown 25’. Good work down the left from Lauren Brown saw Jenna Hoey have a shot from top circle but her effort was well saved. It was during this spell that North Down, with 5 minutes remaining of the first half, were hit with a sucker punch. Cookstown won a free in their defensive 25’ and with the free taken quickly Ruth Brown was able to race through the middle of the pitch unchallenged. A through ball that took Mornin and Brittain out of the game found twin sister Claire who made no mistake as she coolly slotted past Chrissie McKee to put Cookstown 1-0 up. Again North Down got the ball back and attacked but in an almost identical incident Cookstown counter attacked up the pitch, captain Laura Clarke broke the play down at the halfway line and was sent to the sin bin as a result. The Comber girls saw out the remaining few minutes of the half a player down but without incident.

In previous seasons going a goal down would have been enough to kill off North Down but not this young and spirited side. Coach Frazer reorganised his troops at half time and in a bid to get a goal back brought Pamela Johnston into the midfield and pushed Rebecca Mercer into the forward line. From the second half pass back Clarke found Mercer at the Cookstown 25’ who turned and won a free which was to set the tone for the remainder of the game. Selina Lewis and Lauren Brown were causing plenty of problems on the left hand side and it was from such an attack that the equaliser came. Lewis found Clarke at the front post, who with the angle against her, squared the ball on her reverse for Rachel Lucas who with the goalkeeper already committed was able to calmly slot the ball home. Now with their tails up North Down pushed on to take the lead. Again good interplay on the left from Brown and Lewis led to a free in the corner. Lewis saw the opportunity to take it quickly and worked her way into the circle and forced a shot on goal, her effort was well saved but the keeper could only push it back to Lewis who was following in on the rebound and looped the ball high into the goal much to the delight of the home team players, bench and substantial crowd of supporters.

As Cookstown pushed for an equaliser the game became very stretched which worked to North Down’s advantage as Brown, Clarke, Johnston and Rachel Hutchison were able to get the ball in behind to forwards in the channels. It was one such through ball that found the ever present Lucas who was sandwiched by three defenders as she drove towards the net. A short corner certainly but the away side were dismayed when a penalty stroke was awarded. Clarke picked the wrong day to miss her first in seven as the keeper parried her effort away and the opportunity for the comfort of a two goal lead slipped away.

This lifted Cookstown and they pushed hard for an equaliser but Rachel Mornin and Bethan Brittain were solid in central defence and continued to clear the ball to safety. Another series of short corners were well defended by the home side and with some 5 minutes left they were able to get the ball up the pitch and win a number of frees to help run down the clock. With just 3 minutes to go Cookstown got the ball back for one last attack and with the umpires having already signalled 2 minutes Cookstown were awarded a short corner. Again the ball was cleared and a hit out awarded. Finally the umpire blew for full time and the home side went into raptures as the realisation that they were going to the final set in!

The opportunity to play a final at the national stadium is just reward for this young squad with no fewer than 6 players playing their first season of 1st XI hockey. This side was largely written off last summer with the loss of 4 senior players but with a top half of the table finish already secured, and now a final to look forward to, they can hold their heads high knowing they have already exceeded expectations. No more than they deserve for all the hard work they have put in.

Joint Players of the Match: Lauren Brown and Laura Clarke