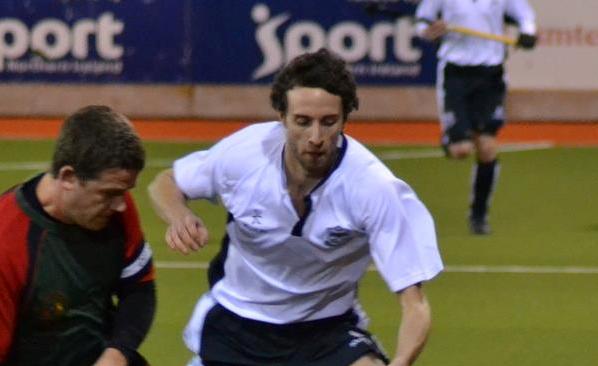 North Down seconds faced a must win encounter at home to Newry seconds on Saturday after losing their first 4 league fixtures, albeit against very strong opposition. Newry at home provided the seconds with a great opportunity to register their first points in Junior 1 and they duly delivered. A strengthened squad had a big part to play with Colin Mockford returning from a lengthy injury layoff, Davy Frazer playing his first game of the season, Steven McGimpsey turning out having returned north to work for a number of weeks and Peter Shields coming home from sunnier climes. This provided the seconds with a solid spine and the opportunity to swap players on and off which they couldn’t do in previous weeks. Coach Ritchie provided the team with his customary inspirational team talk and the match commenced.

North Down started the game at a rapid pace and put pressure on a slow Newry defence. This gave them the confidence to push on and they were rewarded with a goal after 10 minutes when the impressive Richard McMillan opened the scoring after good build up play. 1-0 up and playing their best hockey of the season, the seconds probed to find goal number two which would give them breathing space. Sharp passing and good movement from midfield and the forwards resulted in numerous chances but several excellent stops by the Newry keeper and a number of misses meant half time came with the same score line. 1-0 up was a dangerous position to be in and although there was praise for the first half performance, coach Ritchie quickly reminded the team that only half the job was done and the next goal would be vital.

North Down came out ready for a fight in the second half as Newry had overturned a 3-0 deficit at Banbridge the week before to snatch a point so the game was far from over.

The start of the second half saw Newry get more of a foothold in the game as they tried to slow the pace down and play their own game. However, the seconds quickly snuffed out this attempt and started to play free flowing hockey which Newry simply couldn’t contain. The midfield trio of Galway, McGimpsey and Shepherd provided the bite which enabled the forward line of Magee, McMillan, Shields and Tate to torture the Newry defence time and time again. The vital second goal came after 45 minutes when Stevie Magee scored with a composed finish from a short corner. This brought about some relief on the home bench and the first points of the season were well within sight. The seconds continued to dominate against a tiring Newry side that were without a sub after a player went off injured in the first half following a collision with keeper Matt Jordan. Number 3 came 15 minutes later when Pete Shields scored a rather fortunate goal. He found himself in a great position in front of goal and after playing an impressive one-two with the goalkeepers’ pads, lifted the ball high into the net to send the North Down faithful into raptures on the sidelines.

As time started to run out, North Down enjoyed the freedom of passing it around nearly unchallenged at times. It was time to make inroads into the minus goal difference the seconds had found themselves in after a number of heavy defeats and this was delivered when Stevie Magee scored his second of the day with another cool finish after 68 minutes. The skipper is playing with more freedom due to the improving performances of the team. One minute later and it was 5-0 after a Newry defender attempted a clearance with a wild swing only to miss the ball completely. Galway took the ball, slapped it across for McMillan to slap home his second of the game. This didn’t quite end proceedings; number 6 was scored when the impressive Davy Frazer burst through on goal, took it beyond the despairing dive of the keeper and proceeded to slam the ball into the leg of the defender on the line. Umpire Parsons didn’t hesitate giving the stroke and Frazer himself stepped up to wrap up a very rewarding and deserved six goal victory for the seconds.

A jubilant second eleven were quickly brought back down to reality as coach Ritchie reminded all that the team are still second from bottom in the league with a number of teams on 4 points. The second’s juggernaut rolls on to Kilkeel next week where confidence will be high of making it two wins in succession.