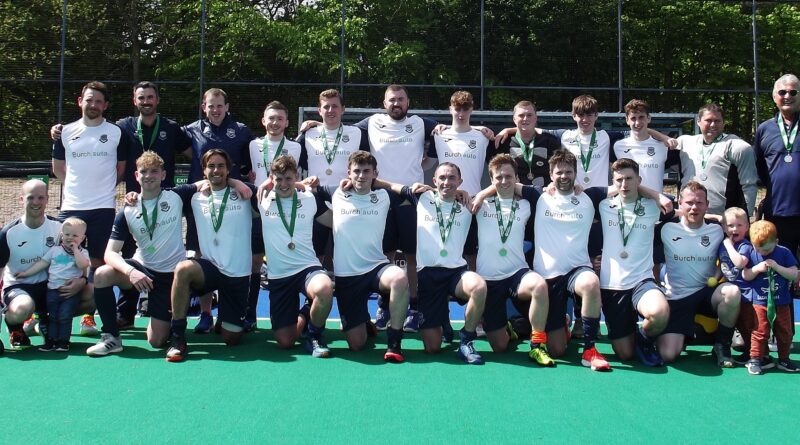 On Saturday North Down played Queens in the final of the Irish Hockey Trophy at sunny Banbridge in front of a large crowd of supporters.

The first quarter was evenly contested with neither side creating any opportunities.  North Down thought they had won a corner when  the ball appeared to hit a Queens defender’s foot but the umpire waved play on.

North Down were taking control in the second quarter and were making progress down their right but the final pass wouldn’t fall for an incoming forward.  The best chance fell to Bailie but he was unable to get the vital touch.  Templeton made a great run and his cross was missed by the forwards.  Orr ,Gilmore and McKeown combined to win a free in a dangerous position but Queens cleared  the danger.  In a rare Queens attack Rodgers did well to make a block and clear his lines. With 2 minutes remaining Queens were awarded a corner when a defender was alleged to have let the ball hit a foot but the shot was blocked at he expense of another corner which again North Down disputed as Templeton claimed the ball came off his stick.  On this occasion Irwin smashed the ball into the net to give Queens a 1-0 half time lead.

At the start of the third quarter the North Down defence was caught in possession at the half way line.  Queens transferred the ball forward quickly and Campbell kept his composure to round keeper Rodgers and score with a strong reverse shot.  From this point onwards North Down laid siege on the Queens goal but found their keeper in outstanding form stopping everything that was thrown at him.  North Down had four corners in quick succession but their efforts were well saved by the keeper.  Spratt and Welsh were causing problems winning 3 further corners but again the routine was not slick enough.  Spratt won another corner but McKeown’s effort was well saved when it looked to be goal bound.

In the final quarter Queens won a corner but the effort went wide.  Great play down the right saw Orr cross and his effort was brilliantly deflected goalwards by Tweedie but somehow the keeper made a superb save.  With 5 minutes remaining, North Down substituted their keeper for another outfield player.  An overhead clearance saw a Queens forward in the clear but he delayed his shot into an open goal allowing a defender to deflect his effort wide. In the final minute North Down finally got the goal their play deserved with Gilmore flicking high into the net after the ball bobbled about in front of goal.

A 2-1 defeat which was hard to take as North Down’s play deserved more but congratulations to Queens on their success. They took the few chances that came their way while North Down squandered many opportunities.

Burch Autos Man of the Match was Jamie Orr.