North Down entertained Newry on Saturday at Comber Leisure Centre in the final game before the league splits.  Having defeated Newry earlier in the season North Down entered  the game with confidence and were hoping to end this part of the league on a high but Newry had other ideas and their fighting performance was rewarded with a 2-1 victory

North Down introduced Nick Pio to their squad. The talented South African U21 player is in the Province on holiday and has been signed until the end of the season.

North Down opened strongly and dominated play in the first quarter.  Early on Gareth Bailie had to leave the pitch after receiving a nasty nose injury and moments later Andy McGimpsey played a great ball into the circle but no one was able to get on the end of it.  Gareth McKeown made ground and crossed but again no one was able to make contact.  Andy Boyd, who was having a sound game, moved upfield and crashed the ball into the circle and though McKeown got a touch the ball unfortunately went wide.

In the second period North Down maintained their superiority.  Spratt and Pio combined well but the Newry defence held firm before Boyd found Bailie in the circle however his shot was easily cleared.  Pio then won a corner but the routine was poor and, as Newry began to grow in confidence, Rodgers was called on to make a save and Linter then turned a corner round the post.  The home keeper then had to be quick off his line to make a smart save as Newry pushed for the opener.

At the start of the third quarter Phil Templeton failed to control the ball at the top of the circle and the centre forward pounced to smash the ball into the roof of the net.  Hunter played a great cross field ball to Linter who made ground down the right but his cross evaded everyone.  Newry at the other end were unlucky when a reverse from the left side of the circle crashed off the post.

Linter conceded a corner early in the final quarter and it was smashed into the roof of the net to put the visitors 2-0 ahead.  This blow served to waken North Down up and they pressed to reduce the arrears.  They won a corner which was partially cleared but McKeown kept his cool to flick past the keeper and maintain his recent scoring streak. Spratt and Pio again combined but Spratt’s reverse was saved.  In the final minute North Down won a corner but when the initial shot was saved the ball was played across goal where no one was able to get a tap in equaliser

The two teams meet again this Saturday in the first game after the division of the Premier League and North Down will be hoping for an improved performance.

Burch Autos Man of the Match was Andy Boyd. 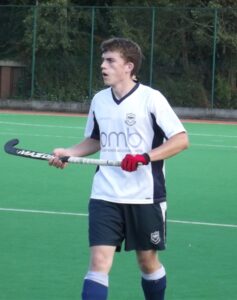