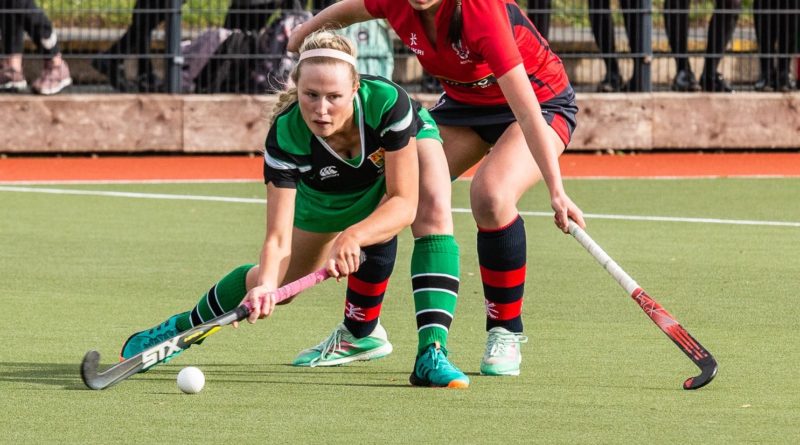 This season’s ladies top goal scorer and regular first eleven fixture Amy Kimber aka AJ is next in the profile series.  Thanks AJ for taking part.  Next one on the list is a men’s third eleven player!

I started playing hockey at Sullivan Upper school in year 8, almost 7 years ago!

Yes! I started off at Bangor Ladies Hockey club where my younger sister played and my dad coaches at before moving after u15 level to North Down HC.

I have now been at North Down for three seasons, starting there at 15!

In my dreams I would like to play in Holland or USA but realistically the goal would be to play in the Premier League again.

My best memory hockey wise has to be becoming club top goal scorer this season, social wise it would have to be the dinner dance last year!

Has to be Caitlin Taylor! Always strong and composed at the back and you feel safe as a player when she has the ball. She also can play in any position which is a bonus!

I do not! I’m more of a rugby spectator. Any suggestions for a football team to follow would be appreciated! (Editor’s note – can’t do any better than Manchester’s reds!)

My favourite personal sporting moment would have to be going to the UK Schools Games twice! A favourite all time sporting moment was watching Usain Bolt win the London 2012 Olympics on the tele whilst also being in London at the time!

Definitely has to be to Florida in America with my family. I’m a sucker for big roller coasters so I really enjoyed the theme parks like Universal Studios.

It has to be In for a Penny by Stephen Mulhern on a Saturday night! Funniest programme I have watched!

It would have to be between The Avengers or The divergent films. I’ve watched so many movies that it’s hard to pick just one.

My favourite food would have to be Indian and my favourite drink is an American style Oreo milkshake.

It has to be semi-skimmed, green lid all the way.

What have you been doing during Quarantine?

I had been doing a lot of sleeping and eating during the beginning of quarantine. I now have been working at the COVID-19 test centre in Belfast as part as the mobile testing unit. I’ve really enjoyed working there and it is great to be a part of something so special!

I have been attempting to do runs during the week. I started off with 5KM runs but then I found this difficult so I started doing shorter distances like 3KM at a higher intensity. I also have been doing Chloe Ting workouts.