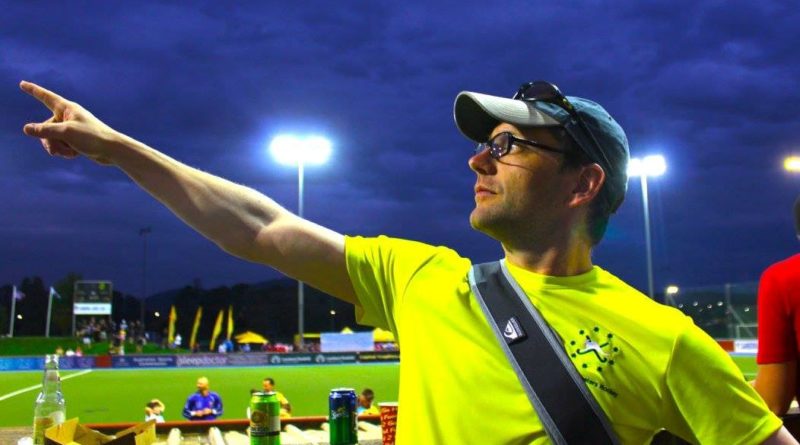 The literary doyen of the match reports.  You’ve read them all, understood some of them, but how does Stevie Magee really view the world?

My first ever match was for Ballynahich U18s away to Crossgar U18s on their grass pitch. I would have been about 15. They beat us (literally), but one of our dads (not mine!) did doughnuts on their pitch with his car in protest when we were leaving so honours even I think.

Far too many to mention but I will anyway (in reverse order) – Annadale, Cliftonville, Holywood 87, Queens, Reading, Bangor and Ballynahinch

I think I was 34 when I joined so next season will be my 15th…I think.

Yes, I want to make that mythical pass to Sam Pyper as he stands screaming behind the entire opposition midfield and defence!

Winning Junior 1 with the 2nds a couple of season ago.

The last few years I enjoyed hooking up again with Allen Irwin before his knee ran up the white flag. We’d played together a good bit when we were younger and we had a good understanding I think. Like a good rug ties the room together, Al really tied the team together. I was his go to man for the long ball out of the back and such was his fearsome reputation that if it wasn’t going well, which was rarely, the other guys would shout at me to shout at him to tell him to stop it. Never to him though, too wary of the Irwin Thermonuclear Hairdryer I think.

I’d want Paul Adgey as he seems to be able to carry a quiz team himself while I, in his words, “got frustrated because it was interrupting his drinking and philosophical musing“. Given that, I wouldn’t want me on the team.

I don’t get football at all. My father supports Newcastle. It seems to make him very unhappy apart from that time Kevin Keegan was in charge.

I do a bit of amateur Mockey-baiting but that’s about it. I’m interested in baseball only because I’ve never been able to work out what is going on. If everyone else has sloped off to bed and it’s on I’ll watch it and wish I understood it.

I’ve mentioned winning Junior 1 with the 2nds above, but another one would probably be from the same season – our Irish Junior Cup semi-final against the eventual winners of the competition Glenanne. We came from 4-0 down to tie it 5-5 only to get beaten on the shoot-out. If the game had lasted another couple of minutes I’m pretty sure we would have won it in normal time as they were collapsing like a house of cards. I was captain and I’d come straight to the pitch from Dublin after a transatlantic flight. I was pretty wobbly (so much so that I actually fell over at one point) and probably shouldn’t (definitely) have been anywhere near the pitch but the rest of the guys were amazing and I was so glad to have been a part of it.

My all time favourite was getting to attend the London 2012 Olympic hockey final. I applied for 2 tickets with about 30 seconds to spare before the deadline. I didn’t think I had a mission of getting anything so I turned all the dials to 11 and went for the best most expensive gold plated fur-lined tickets on offer so when I got the text to say I’d been successful a month or two later I had to liquidate a few assets toute suite.

Sharing a family holiday to Florida with a certain local celebrity Milk Magnate is still fresh in the mind. It was pretty entertaining.

Somewhere that doesn’t get above 25C on a belter day. At the time of writing my decking out the back is ticking all the boxes.

No particular style, I like lots of things but Pixies and They Might Be Giants would be my go-tos.

Probably not the news just at the moment.

In terms of impact probably Star Wars. I’m old enough to have seen it the first time round and it blew my 7 year old mind. Other than that the The Big Lebowski – it portrays a life-style and look I aspire to. We’ll not mention David Lynch’s The Elephant Man – I’m tearing up thinking about it.

It would be a toss-up between The Hitchhikers Guide to the Galaxy and Catch-22. Once you’ve read either once through they’re great for just dipping into whenever.

I’d stick Billy Connolly, Douglas Adams and Neil Armstrong down at one end of the table. I’d sit at the other end with my good friend Mockey where I’d be disagreeing violently with everything he says.

The odd jog around Cherryvale plus Turkish Getup-ing some kettlebells that have been skulking in the spare room for too many years – the holidays are over boys, it is time to “get up”.