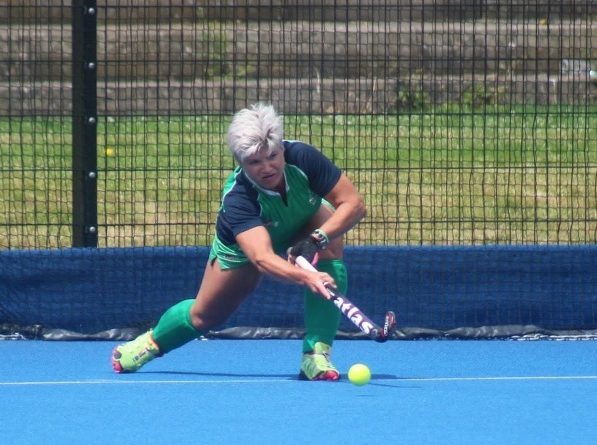 It’s the turn of JR to fess up and account for herself in the latest of our Club profiles series.  To those who have received the questionnaire and said they would do it shortly, the ‘shortly’ moment has passed.  Sort it now!

I was about 8. Bill Jamison was running a Club summer week at Park Way on the gravel for the kids. No youth hockey programmes in those days!

No – a North Down girl through & through !

I started playing Club hockey at 15 when my mum and Dorothy Boyd officially started the ladies 5ths, never missed a season and played every one since.  Kids in December and back in January for rest of season!

I actually achieved one recently – playing with my youngest daughter on the 4ths – played with my eldest daughter last year – proud mummy moments! And as for a learning a new skill and if it’s possible to teach an old dog new tricks – would love to master a disguised pass before I finally hang up my stick!

I’ve had so many fantastic moments- too numerous to pick out – winning cups, plates and leagues on every team 5th to 1sts ! . . . but without doubt the camaraderie, social and friendship over the years at North Down is second to none and quite simply the best!  Been so blessed to have made life long amazing friends.

It has to be a Krista ! She is a mine of information and totally amazes us all with facts and trivia.  Who I wouldn’t want is someone like me! – totally hopeless at quizzes but love the idea of them!

Don’t really have much time for any other sports as such but really enjoy keeping fit. Back in the day I would have been a regular gym junkie!

Personal sporting moment has to be winning gold at the Masters World Cup in Barcelona 2018 with Ireland 50s. In the final v Australia we scored a scrappy goal very early in the match from what I think was our only corner and then defended like demons the rest. In the last quarter they took off their keeper and we didn’t even make it into their 23 metres area! – in total they won 18 penalty corners – the last one awarded on the final whistle – the most exhilarating and exhausting experience played in almost 30 degrees! The icing on the cake was my sister Maxine and her friend flew over for the final !

One of my Favourite sporting moments was watching GB women win gold in the final v Holland that went to run ins at Rio Olympics in 2016.

Toss up between New York at Christmas and fabulous Dubai.

Lazy summers in Argeles, France with family and friends when they can make it.  A simple life of bbqs, shorts and t shirts ! . . bliss !

I’m not a big music fan – but do have a varying taste . . definitely not into the rave / techno stuff – no surprise there!

I’ve a very sweet tooth as anybody who knows me will confirm . . so really anything sweet and gooey and full of calories ! chocolate fudge cake, carrot cake and Moe Emerson bakes the most amazing coffee cake that I hide rather than share!  I am partial to the odd gin – (JP -would that be 3, 5 or 7?)

David Attenborough for his knowledge, Dawn French for her laughs, Hugh Jackman for his charm and Clint Eastwood as his were the first films I watched (thanks Dad !)

Cutting grass, hedges, power hosing etc – apart from that I’ve been doing some running and a few workouts.