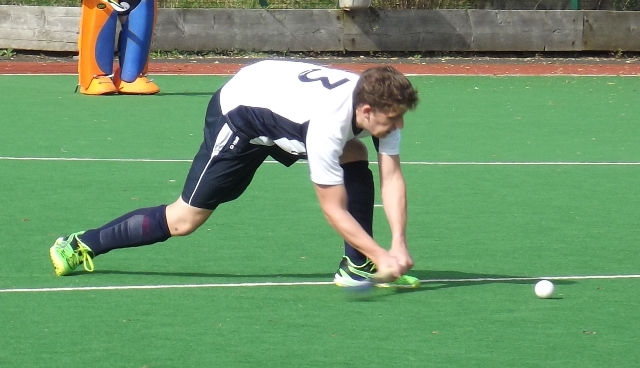 North Down travelled to windswept Upper Malone on Saturday to play Queens in a Premier League game.  Having dominated possession for most of the game the visitors were disappointed that they were unable to turn this into goals and had to settle for a 1-1 draw.

North Down put pressure on the Queens circle but either chose the wrong option when the goal was at their mercy or the final pass was not accurate enough.  Half time arrived with the scoreline blank.

The third quarter followed a similar pattern with North Down winning several penalty corners.  Eventually David Morris broke the deadlock.  He received a perfect pass at a short corner and slammed the ball past the helpless keeper.  Everyone thought the floodgates would now open but North continued to squander chances.

In the final quarter Queens found their way into the circle and won several corners but these were well dealt with by Darren Rodgers.  With four minutes remaining Queens with their first shot on goal in the entire game got the equaliser.  A poor attempt at a clearance allowed Queens to slam the ball into the circle and their winger made no mistake with a strong reverse shot.

This was a disappointing result for the visitors who will have to sharpen up their game as they will face stronger opposition in the next few weeks.  They will do so without influential skipper Ross Linter as he enters hospital for an operation on his injured hip.