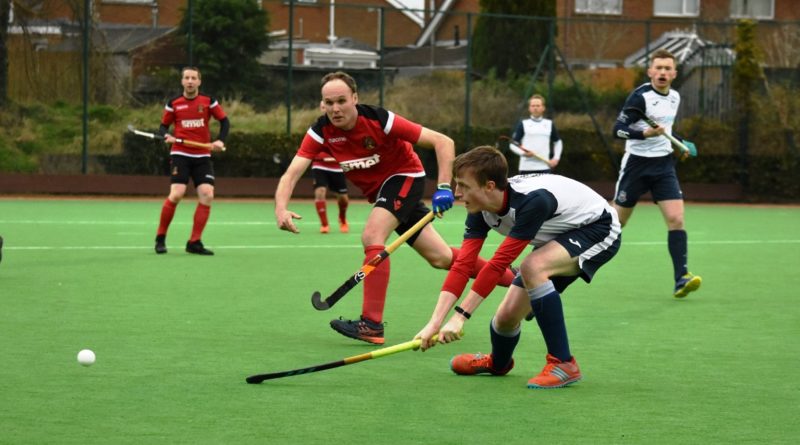 North Down entertained Newry in a Premier league game on Saturday hoping to reverse the scoreline earlier in the season when they were defeated 3-1.

North Down opened at a fast pace and dictated the early play.  Jonny Moore was unlucky after two minutes when his effort crashed of the post and minutes later had a goal disallowed correctly for feet,  All the play was in the Newry half  but despite winning corners the home side were unable to get on the scoresheet.  They received a setback when Moore pulled a hamstring and was unable to take any further part in the game.  Just at the end of the first quarter  Newry won their first corner and Taylor’s effort was stopped illegally on the line by Jordan Linter and they took the lead by converting the resulting penalty stroke.

The second followed a similar pattern but both defences held firm and the score at half time remained 1-0.  In the third quarter North Down got their just reward when Gareth McKeown picked up the ball in mid circle and flicked strongly into the net.  Scott Moore was then unlucky when he shot narrowly past the post but Newry began to up their game and took the lead midway through the quarter. A long ball from the back bounced in front of Jonny Linter and in an attempt to control the ball he slipped allowing a Newry forward a clear run in on goal giving Rodgers no chance with a strong shot.  North Down fought hard to get back on terms and were rewarded with a penalty after a Newry defender pushed James Clark of the ball as he was about to shoot.  McKeown stepped up and flicked into the roof of the net for the equaliser.

Newry upped their game in the final quarter and won a series of corners which were well dealt with by the home defence but North Down were unable to hold them out and in the final two minutes Newry won another corner. Taylor beat two defenders before slotting home to give his side a 3-2 victory. A cruel blow to North Down who deserved something for the effort they put in but on the day they had to settle for second best.  A win against Bangor this Saturday is essential as they try to secure their position in the top half of the league.

Burch Autos Man of the Match was Phil Templeton