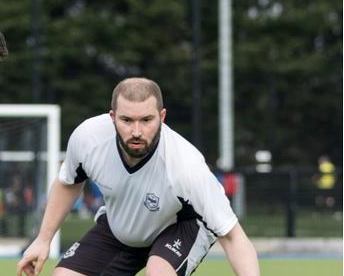 With pressure on numbers, the fifths travelled to play Annadale 4ths at Campbell College with only 12 men.

The game started evenly with not much between the sides. Some sterling work in midfield confined Dale to only a couple of chances in the first quarter until, with 3 minutes to go, Dale broke into the circle and a firm first time shot made it 1-0 to the home side.

The game continued in with Dale pressing the North Down defence which under the direction of Gavin Rogers stood firm and with Roger Graham in great form making a number of key saves. Again with only a few minutes left of the period Dale scored a breakaway goal to go into half time 2-0 up.

The fifths started by far the better in the second half and it looked like they would be the next to score and indeed they were.  Great work in midfield and overlapping play by Peter Bond who squared the ball to Michael McClelland who crashed the ball low to the keepers left and North Down were back in the game.

For the rest of the quarter North pressed forward and look like they were going to get the equaliser. The returning Michael Mitchell worked his socks off at right mid but unfortunately yet again with 2 minutes remaining in the quarter Dale broke from their circle and in seconds the ball had smashed Rogers back board with a well hit shot to make it 3-1.

In the final quarter North Down gave it a go scoring a contender for goal of the season. Interlinking passing down the right, a cross from Andrew Haire into the circle at waist height was controlled beautifully by Jamie Consiglia and Simon Wilcock at the back post completed the finish.  Sadly for the second week in a row the fifths switched off after scoring and Annadale strolled in to make it 4-2 and the final result was in.

Burch Autos Man of the Match was Peter Bond.