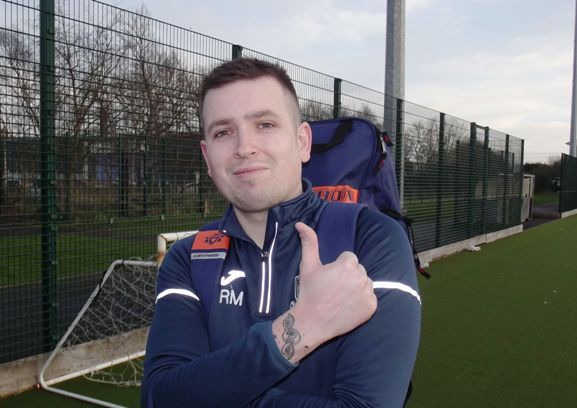 With all other local hockey off due to frost, the balmy micro climate of Newtownards was the setting for an excellent game of hockey between North Down fifths and Annadale fourths at Regent House last Saturday, the pitch in perfect condition!

As all of Annadale’s games had been cancelled it was no surprise to see them arrive with a full squad and they started the better of the two sides, dominating in midfield and creating constant overlaps down their right hand side. North Down just couldn’t pick up their men and stay goal side in the first 10 minutes. Dale quickly capitalised breaking through the middle into the top of the circle and a high shot passed Ryan McKee into the top right of the goal.  Dale continued where they had left off and in the ninth minute went further ahead to make it 2-0.

North Down then created a number of good chances in the circle.  Stephen Magee had a great opportunity to score only to have an airshot allowing the Dale defence to clear. Minutes later Stevie rattled the post, leading to a short corner from which a blistering shot from Matt Murray beat the keeper and the fifths were back in the match.

After the quarter break North Down continued to create chances with Sam Pyper going close and Matt Murray hitting the side netting when he possibly should have squared the ball to the waiting Peter Bond. It looked like the home team pressure would tell and the crowd was not disappointed when young Guy McGonigle played an exquisite pass through the centre of the Dale defence right onto Simon Murray’s stick.  Simon strolled into the circle and crashed the ball past the excellent Dale number 1 to make it 2-2 on 26 minutes.  However, the state of equality only lasted 2 minutes as a sucker punch from Dale scoring from a short corner put the visitors 3-2 up at the end of the first half.

Into the second half and both teams continued to play good hockey with the home team probably having the lion’s share of the chances. A mixture of poor finishing and great goalkeeping from Annadale’s keeper kept the visitors one goal ahead and the third quarter was scoreless.  In the last quarter, the tired team were asked for one final effort. Several more good saves from the Dale keeper kept the Comber forwards out and frustratingly the score remained at 3-2 until with 13 minutes to go a change of formation saw Peter Shields, Sam Pyper and Stevie Magee, over 900 North Down goals between them, all in attacking roles at the same time on the same pitch.

Almost immediately there was pressure on the visitors’ defence. A chance fell to Matt Murray with 7 minutes on the clock and the ex-Dale player didn’t need to be asked twice, slotting past the outstretched Annadale keeper.  North Down looked like the only winner, but only for 75 seconds.  Annadale broke down the right to the bye line where the ball was squared to any one of 3 attackers to make it 4-3.  There was drama until the final whistle as North Down won a short corner with 30 seconds remaining.  The entire team went up but unfortunately Stevie Magee’s shot was easily parried and the game ended 4-3 to Annadale.
It was a superb effort against a strong Annadale side but unfortunately North Down just didn’t get the rub of the green.

Burch Autos Man of the Match was Matthew Murray.