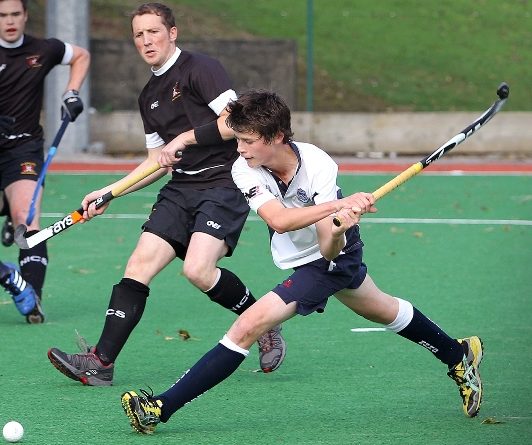 The thirds travelled to play their Cookstown counterparts with a depleted squad of 12 last Saturday.

The first quarter started with the normal older guard of the hosts and North Down were very much on top turning over possession and causing problems for the Cookstown defence. A deflected Tom Donnan slap into the circle looped up and skipper Sam Pyper cleverly volleyed over the advancing keeper. One nil to the visitors but celebrations were cut short with the hosts appealing to one of their umpires that it struck a foot and the goal was struck off.

Cookstown started the second quarter with five fresh new faces as reinforcements! The visitors stood firm and held out wave after wave of attack with Paul Beaney nibbling away constantly and breaking down play, Colin Mockford with goal line clearances and Jamie McAuley making a number of great saves to keep it scoreless at half time.

Into the second half and North Down were frustrated with a number of decisions going against them.  After one such ruling, rather than setting up and maintaining discipline, the thirds were slow to react and a quickly taken free lead to a converted short corner with a firm strike through the legs of McAuley.

In the final quarter North Down started to get back into the game and blistering runs and reverse crosses from Tom Donnan repeatedly flew past the back post. It was Donnan that soon won a short and duly dispatched a drag high into the roof to equalise. Minutes later Donnan was again on hand when he finished from close range to stun the hosts and take the lead. With 10 minutes remaining the Comber boys tried to manage the game out but gave possession away too many times and it needed Jamie McAuley to pull off some super saves to keep the lead. However, Cookstown converted a penalty corner right at the end to claim a share of the points.

Burch Autos Man of the Match was Tom Donnan