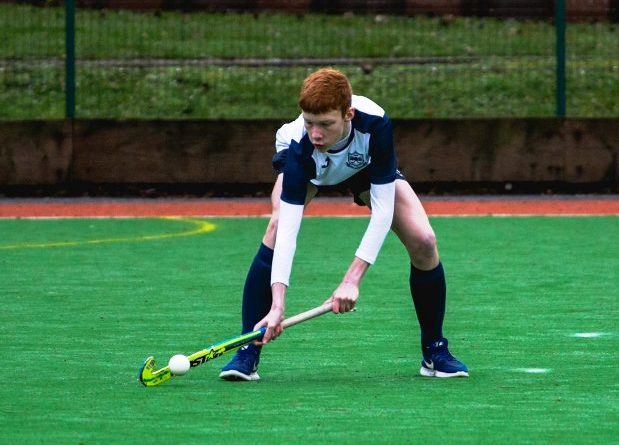 North Down fifths got back into the promotion mix with a well deserved 4-1 win against local rivals Bangor 4s at Comber last Saturday.

The Christmas rust was observed on both sides in the first quarter. North Down were missing their talisman midfielder Peter Shields but had great cover in the form of Robin McMullan and the new signing from Bangor, Simon Murray.  The fifths held the upper hand in the first quarter with good passing moves down the right causing difficulties for the visitors.  The first goal came on 9 minutes from a quick pass from Peter Bond to Angus Johnston who powered his way into the circle and at the second attempt slotted home.

Bangor edged back into the game during the second quarter as the home team struggled with their shape and allowed Bangor more space down their right hand side. On 34 minutes Bangor equalised after a mix up in the centre of the circle to make it 1-1 at half time.

The first minute of the second half saw Bangor earn a short corner which Roger Graham saved well but in the process he gave sweeper Paul Revill a mouth injury forcing him off the pitch.  This was pretty much the height of Bangor’s pressure and it was now just a question if North Down could push on and get the winner with 25 minutes remaining.  Two goals in three minutes settled it.  On 47 minutes direct play from the back down the right and into the Bangor circle found Matt Murray with three Bangor defenders around him.  The striker turned sharply and rattled the ball into the bottom corner. A superb hit which two keepers wouldn’t have stopped.  Three minutes late Adam Skelly fed the ball into the circle once more to Murray who again found the bottom corner with a deft finish through the keeper’s legs making it 3-1 to the home side going into the final quarter.

Bangor were all but spent as wave after wave of North Down attacks put their tired defence under immense pressure. On the hour Michael McClelland ghosted into the circle and slotted home with a well placed slap shot low to the keeper’s right to secure the three points.  The rampant fifths then had the dubious luxury of having three further goals disallowed in the final 10 minutes but by then the result was in the bag.

Burch Autos Man of the Match was Adam Skelly.