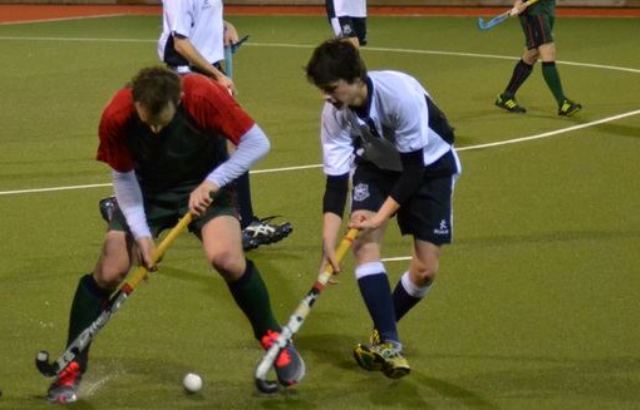 It started as a cagey affair with the home side having the better of the first 10 minutes. Sam Pyper and Greg Bell had a couple of circle breaks but were unable to trouble the Service keeper. Both sides were trying to play decent hockey with fast switching of play from right to left and direct channel balls into the 25s.

As the local derby pace heated up, green cards were exchanged on both sides in an effort from the umpires to keep a lid on things.  North Down felt hard done by when a penalty flick appeal was turned down after Aaron Saunders was scythed down in the circle.

The first goal of the game came in the last minute of the first half with a controversial short corner given to Civil Service. The punishment was made worse when a less than powerful flick found its way into the North Down net to make it 1-0 at half time to the visitors.

Into the second half and typical tenacious tackling in midfield from Andy Walls mirrored the spirit the entire North Down team were showing.  However it was Civil Service who camped themselves in the home half for almost the entirety of the third quarter.  The North Down defence stood firm, with young goalkeeper Alex Montgomery proving yet again that he is one to watch for the future but is already beyond his years in goal.

Miss of the season has to go to the Civil Service centre forward, who skinned the home defence only to blast over with the goal at his mercy but Service eventually beat the North defence again from a short corner to increase their lead.

North Down were beginning to tire going into the final quarter and their task was made harder by effectively going down to 11 men after Greg Bell suffered an Achilles injury. With 10 minutes remaining the thirds scored a short corner through Aaron Saunders to make it 2-1 and the game was on again.

With 3 minutes to go the chance North Down were hoping for fell to Sam Pyper.  In what seemed an eternity for the ball to drop and stop spinning, Sam had to snatch at the shot allowing the Service keeper to make a routine save.  That was the last chance of the game and Service sneaked the result 2-1, in what was one of the better derbies between the two clubs in recent years.

Burch Autos Man of the Match was Tom Donnan.