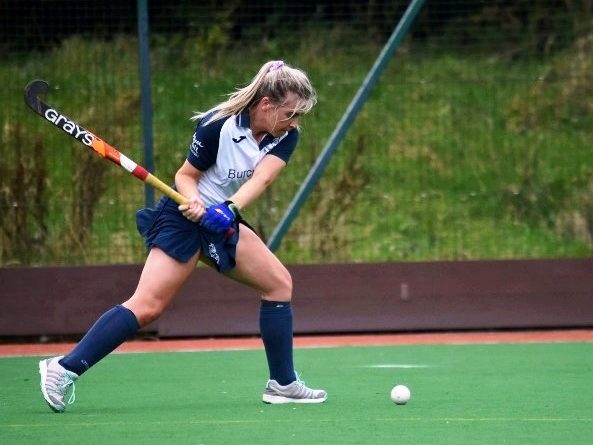 North Down arrived to play KV in what felt like sub-zero temperatures last Saturday at The DUB. The first quarter of the game was tightly fought with lots of movement of the ball up both sides of the pitch. Good movement from Heather Britain and Alex Boyd in defence began some strong attacking play with four shots on goal in the first quarter. Unfortunately two quick breaks for KV resulted in them getting an early two goal lead.

North Down came back more focused in the second quarter with good movement from Lauren and Olivia Brown in the centre creating a few opportunities that were narrowly missed. Selina Lewis put pressure on the KV midfield and defence with two full runs of the pitch and shots on target. Goalkeeper Nikki Ferris was kept on her toes but saved all shots against her.

After a more successful second quarter, North Down came back full force in the third quarter. Great leading runs from Amy Kimber, Rachael Murphy and Isla Lockhart put real pressure on KV in the circle. North Down had a strong press and resulted in winning three penalty corners in this quarter. The first penalty corner was brilliantly scored by a deflection from Amy Kimber. A second penalty corner was won only minutes later and was firmly finished by Lauren Brown to equalise at 2-2. KV felt the pressure and made another break just before the end of the quarter to restore the one goal difference.

The final quarter was well defended by North Down with no shots from KV. Despite great attacking play up both sides from both Bethany Burrows and Caitlin Taylor, North Down couldn’t convert any goals. Tight defence from all four defenders kept any KV attackers firmly away from the circle but unfortunately this wasn’t enough and North Down sadly lost 3-2.