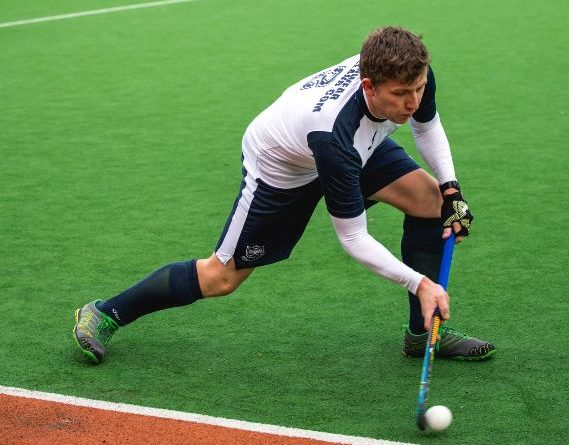 North Down travelled to Mossley on Saturday in a buoyant mood hoping to extend their lead at the top of the Premier League.   However with two late cry offs due to illness and coach McKeown on holiday in Australia the visitors were always going to be up against it.  The game was played in extremely cold conditions but  to their credit both teams played with  purpose and skill.

The first quarter was evenly contested with neither side able to get control and chances were few.  However with a minute remaining disaster struck the visitors as a defensive mistake allowed Mossley in for a very fortuitous goal.  North Down had won a free hit but unfortunately the attempted pass was poor and could not be controlled leaving the Mossley forward a simple run in on goal.

The second quarter followed a similar pattern with neither side able to breakdown well organised defences and neither keeper was called into action. The third quarter proved to be North Down’s downfall conceding two further goals which could well have been avoided.  The first came from a poor pass out from the back.  The ball was intercepted and the forward gave Rodgers no chance with a strong shot. The third came following a melee in the circle.  North Down had several chances to clear but failed and with Rodgers out of position Mossley took advantage and scored what was a very scrappy goal.  Phil Templeton gave the visitors some hope when he converted a short corner with minutes remaining in the quarter.

In the final quarter North Down pushed forward in search of further goals allowing Mossley more space up front and the defence at times was stretched.  However their efforts paid off when Linter played a superb overhead pass which resulted in a free on the 25. The free was quickly taken finding Gilmore who remained composed drawing the keeper and slipping the ball to Moore to score.  With 7 minutes remaining North Down pushed for the equaliser and Gilmore came closest when he made room for himself at the top of the circle but saw his shot go narrowly past.  With time running out Mossley attacked the circle and were awarded a penalty stroke when the ball struck a defender’s foot.  Rodgers got a touch to the ball but was unable to keep it from entering the net.

This was a disappointing result for North Down but both teams should be congratulated in providing an entertaining game in bitterly cold conditions for the large crowd.

Burch Autos Man of the Match was  Phil Templeton