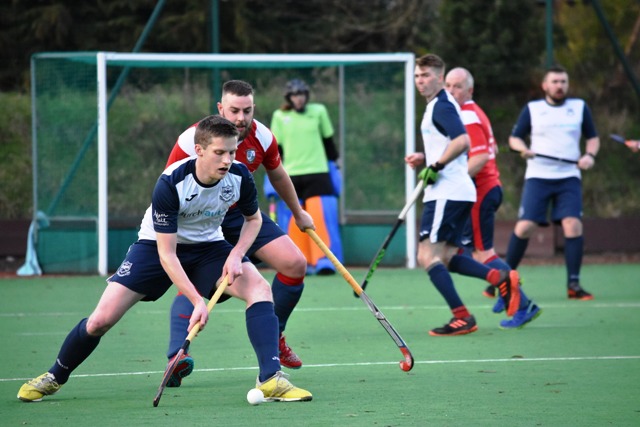 North Down welcomed Ballynahinch in a Premier League game at Comber Leisure Centre on Saturday and secured three further league points running out comfortable winners by 4-1.

North Down controlled the game from start to finish never needing to find top gear but in the first period found a well organised Hinch defence difficult to break down. North Down played neat attractive hockey but too often the final pass was inaccurate allowing Hinch to keep their goal intact.

In the second period good play down the right flank by skipper Ross Linter lead to Josh Gilmore putting the home side ahead when he scored from close range.  North Down continued to dominate possession but failed to add to their lead eventually finishing the half with a solitary one goal advantage.

In the third period Gilmore got his second when he scored with a strong reverse shot from the edge of the circle after being put through by David Morris.  Shortly afterwards Gareth McKeown made sure of the points when he picked up a poor clearance and attacked the circle before blasting past the keeper with a reverse stick shot.  To their credit, Hinch pressed forward winning a penalty corner which was stopped on the goal line by Jordan Linter’s foot.  McIlwaine scored Ballynahinch’s first Premier League goal from the resultant penalty.  Michael Black then restored North Down’s three goal lead with a strong shot from the edge of the circle.

More composure in the final third and a better corner routine would have ensured a more acceptable scoreline but with the reverse fixture this Saturday in Ballynahinch it is hoped that these matters can be improved and North Down secure the points and improve their goal difference.

Burch Autos Man of the Match was Phil Wilson