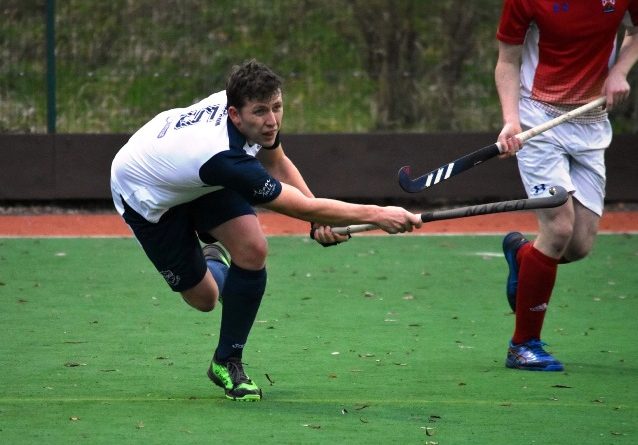 North Down entertained Queens in a Premier League game at Comber Leisure Centre on Saturday and ran out comfortable winners by 7-0.

Queens, who lost most of last year’s squad, were always up against it and defended stoutly but unfortunately had no answer to the slick North Down passing game.  North Down opened the scoring in the first quarter when Josh Gilmore pounced on a clearance and flicked into the net but at the other end Darren Rodgers had to be on his toes to block a rare Queens effort.

The second quarter saw North Down take control with two goals from short corners. The first was a direct flick from Phil Templeton and the second was a rebound from another Templeton corner which had been saved by the keeper but on this occasion David Morris was on hand to flick home the rebound.

The third quarter saw North Down further increase their lead with another strike from Templeton at a short corner.  It was then the turn of Robbie Davidson to get on the score sheet.  James Clarke showed his skills and passed to Davidson at the back post and he calmly slotted home.

In the final quarter North Down added two further goals.  The first was a deflection by Phil Wilson after the ball bobbled around in front of goal. The final goal came when Graham Larmour made a strong run from the back and slapped the perfect pass into the circle for Gilmore to deflect home.

This was a convincing win for the home side but stronger opposition awaits next week when the Comber boys take on South Antrim in Lisburn.

Burch Autos Man of the Match was Jonny Linter