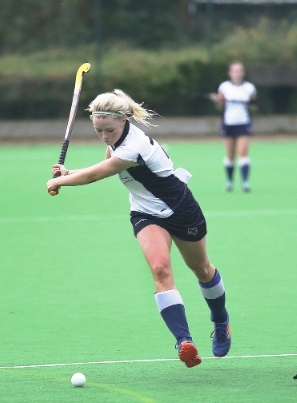 The ladies first eleven travelled to Coleraine last Saturday for their last match of the group stages of the Senior Cup aware that only a defeat greater than 3 goals would see them fail to qualify for the semi final. The girls were expecting a tough match not only due to the stormy conditions but the strong opposition they faced.

The first quarter saw some very strong attacking play with the ball being worked well between Alex Boyd and Lauren Brown, however the girls were unable to get the finishing touch needed and it was Coleraine who claimed the first goal of the game from a well worked penalty corner. The second quarter saw the team lift their game with good drives down the left of the pitch by Bethany Burrows to play the ball into the circle for Amy Kimber and Rachel Murphy. Again the strong defence from Coleraine seemed impenetrable within the circle blocking all shots on goal and a second corner goal from Coleraine made the half time score 2-0 to the home team.

There was a glimmer of hope for North Down in the third quarter when an excellent finish from the top of the circle by Olivia Brown seemed to give North Down their first goal but devastatingly for the team the umpires decided the goal was to be disallowed.  Heads went down and the team let their frustrations show allowing Coleraine to claim another 2 goals. North Down worked hard until the final seconds of the game trying to claim back the goal difference that would see them through to the semi-final but a repeat of last year’s come back from 4-0 down to draw 4-4 was not to be. The girls left disappointed but with the determination to go again in the next league meeting.

Burch Autos Player of the Match was Olivia Brown