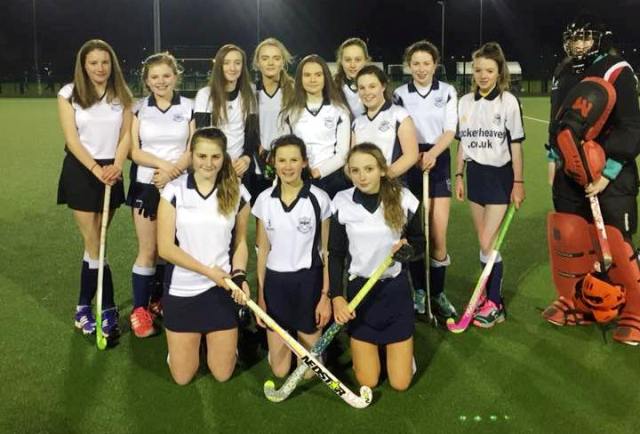 North Down U15 girls played CIYMS on Sunday in the Plate competition at a very rainy Regent House.

North Down soaked up some early pressure defending many short corners. Grace in nets kept it 0-0. The back line of Tilly, Erin, Connie Katie and Sarah won the majority of 50/50 tackles. As the half progressed North Down were unlucky not to take the lead as the ball skimmed across the face of goal on more than one occasion. Both sides began to grow in confidence and play fast flowing attacking hockey. It was a pleasure to watch. The midfield trio of Daisy, Bethany and Tara created some excellent goal scoring opportunities as well as winning numerous penalty corners. However it was still 0-0 at half time.

The second half was much the same and both sides were still pushing for a goal. A lapse in concentration allowed CI to take the lead early in the second half. North Down wouldn’t settle and responded well scoring an excellent team goal with great movement from the front forwards of Lena, Elle, Eloise and Rachel. Great fight was shown and North Down could smell victory. Sadly despite many opportunities to take the lead the scores remained level and the game went to extra time.

After ten minutes of silver goal it was still level with the North Down defence managing to keep the ball out of the net from a very late short corner. Great defending.

The game then went to penalty strokes with CI just edging it by one and progressing to the next round of the Plate.

Despite the result, the effort and commitment shown by all the girls was exceptional today, a really super team performance. Lots of great hockey but sadly a very cruel way to lose.

Player of the Match:  Bethany.  A great game in centre mid and lots of good tackles against a very physical opposition – super!